Since a few people in class seemed to have trouble altering the coding on their Google maps so they displayed with the correct amount of zoom, I thought it would be helpful to explain what I did. I had to adjust mine several times before I figured it out, and it was pretty much the only time I ever felt like a computer genius, so here goes:
After you create your map, click on the 'link' button in the upper right corner: 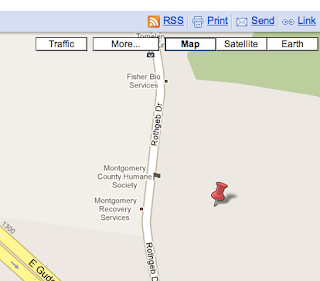 Then, in the box that pops up, click 'customize and preview embedded map.'

A screen will appear where you can change the size and orientation of your map, and you'll notice that the coding in the box corrects itself whenever you make a change. This lets you zoom out on your map to show all your pinpoints (if you have a large area), or zoom in to show individual streets (if you have a small area).
I think Google maps can be a useful tool when writing for the Web. Since so many people already use it, readers won't feel uncomfortable with the technology. The interactive element also makes it especially good for Web writing, because it allows the reader to use the tool, rather than just look at it. Newspapers and magazines can have some well-constructed infographics, but many of these would not stand up to the Web. 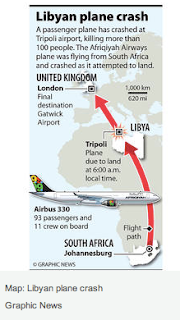 For example, this infographic from the Christian Science Monitor story about the Libyan plane crash has a map and an illustration of the plane, all in one small space. The reader gets a lot of information, and the publication doesn't have to worry about taking up precious real estate in the ever-shrinking news hole. However, if they were to put this on the Web, there would need to be some sort of interactive element to draw in the reader.
My only problem with Google maps is that it can sometimes seem a little boring and pedestrian. Has anyone ever used any other programs to create maps or infographics for the Web?
Posted by Tricia at 5/12/2010 09:49:00 AM 2 comments: Links to this post

When I think about fancy graphics being used on websites, I always assume they are using Abobe Flash. Anytime your computer doesn't have the latest Flash update, suddenly every page on the Web becomes inaccessible because you have to upgrade your Flash player. That's why I was really surprised when I found this article on The Online Journalism Review about whether or not web designers should continue using Flash on their websites. I assumed Flash was the standard.

It was interesting to learn from this article that the reason that Flash is beginning to get phased out is because mobile devices don't support Flash. Apparently the IPhone has never been able to run Flash because Adobe and Apple are in a disagreement and if you try to download Flash on a Droid, you just get a message that says in the first half of 2010, Flash will become available for the Droid. I hadn't realized that this was such an issue, but then when trying to browse the web from my phone I discovered how many websites I couldn't use because I didn't have Flash. With the huge expansion of people accessing the Web from their phones, this has to be a concern for web designers that millions of people can't use their sites and are going to go elsewhere for their news.

The author of the OJR article says that he is beginning to shift away from Flash to alternative design methods because he personally doesn't want to lose such a large percent of his readers. I think this is a really interesting issue that is going to move into the spotlight as more people begin to browse the Web on mobile devices and become more annoyed at the handicap they have because they can't look at sites that use Flash. On the other end, Adobe should be getting worried because companies are going to start moving away from Flash if it means allowing the mobile audience to view their sites.
Posted by Matt Wilson at 5/11/2010 04:07:00 PM No comments: Links to this post