Beware of False Tweets and Pics - Especially During Natural Disasters

The Washington Post's Paul Farhi writes of all the false photos and "news reports" that circulated this week during Hurricane Sandy -- including a tweet that said the New York Stock Exchange was under 3 feet of water.

Turns out the false NYSE tweet was sent by someone with a screen name of "Comfortablysmug," Farhi writes. Further sleuthing uncovered Comfortablysmug's identity. Farhi writes: "BuzzFeed.com first identified Comfortablysmug as Shashank Tripathi, a campaign manager for Republican congressional candidate Christopher Wight (N.Y.). Tuesday night, Wight’s campaign said Tripathi had resigned from the campaign as a result of his tweets."

The Atlantic's Alexis C. Madrigal also writes about sorting the real Sandy photos from the fakes.

What were some of your favorite (real) photos published on news sites of the storm's devastation?
Posted by Chris Harvey at 11/01/2012 05:50:00 AM No comments: Links to this post

This tumbler page is dedicated to humorous bad headlines found on news sites. I guess the mistake of a confusing headline is really easy to make. This worries me. I hope I never make a mistake that makes me sound as dumb as "Ex- HPD officer sentenced to life in rape".

However, many of the posts on this tumblr end with ellipses, suggesting that the headline actually goes on. This is less disheartening. Maybe I won't make a silly headline mistake that makes me look stupid, and this tumblr user is making up a problem that doesn't exist.

I think this site is fun to go through and read. It's also a great reminder to be careful because these kinds of mistakes can make you look really bad. They can also be good for a cheap laugh though. 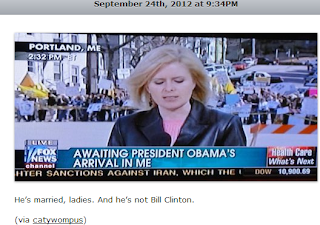 The above is an example of what can be found on badheadlines.tumblr.com from a Sept. 24 posting. This is probably one of the more funny ones. A disappointing number of them are only bad headlines because they have ellipses. I think that the tumblr site could have still been entertaining and be much more accurate if the creator of the page had used actual confusing and terrible headlines rather than relying on long headlines and ellipses.

It's still a fun page to look at.

Journalism.org, in a recent article, made claim via stats that social media users marked a much different tone than news in general; basically, the polls are more critical than the Twitter base of President Barack Obama.

"...More of the conversation leaned Obama's way (35%) than Romney's (22%). But those who favored Obama tweeted not so much to praise him as to criticize his opponent. Of the entire conversation, 9% praised the president and 26% was critical of Romney. Of those favoring Romney, 7% praised him and 15% criticized Obama."

Yesterday I saw #ThingsThatOffendObama trending shortly, but on the whole, #Romnesia and other Mitt Romney trends, like #bigbird or #binders dominate the presidential duel on Twitter. The candidates therefore use social media differently--on my Twitter feed, Obama updates are far more common than Romney's.

Not by much, Romney uses Facebook more than Obama (Is Facebook already "old?" I am friends with my Mema, Aunts, and Uncles on Facebook for over a year now...). At the pace this society moves, as we are so fond of saying, who's to say that can't be true, at least relatively?

Much of this outline the expectations in common-knowledge demographics, but what is often forgotten is that, although Romney trails in the internet, television is the main source of news for most people, where they have both candidates running a close race.

The social media demographics are another resurgence of the parallels of our political situation. Young people--new(twitter)--blue. Old people--tradition(television, even Facebook)--red. Politicians act accordingly, spending their time with said venue(s).

The media rave about how social media, YouTube, and cell-phones have changed the world, but in this case, it's just a new way to express the same cultural and political contours.