This the title of an article in this months edition of " Wired." I think it sums up quite succinctly the reason why we as journalists need to be highly suspect of Internet search results. As the article by clive@clivethompson.net points out, " kids know how to Google- they just can't tell when the results are crap." (pg.062)

In his piece Thompson cites a study done by College of Charleston business professor Bing Pan. Pan and his team gathered a group of students and asked them to search. Not surprisingly students often relied on top results on a Google page. He then switched around the order of the results and students still used the top rated results. And in almost every case the students, most of whom are " digital natives", failed to do the most basic things, like checking an authors credentials or examining where the item came from.

The bottom line of the piece is students aren't being given the most basic instruction on how to separate the " wheat from the chaff" on the Internet.The article suggests by the time students are in college most professors expect them to know this, but why? Its not as though this is a skill that's taught in most schools. And the article goes on to say it's not just the URL but also the tone of the piece that should be looked at.

Not unlike what we were asked to do on our recent mid-term. In the world of online reporting perhaps " crap detection" is one of the most important skills we can have.
The author notes that's especially true at a time that the lines between news and infotainment are becoming quite blurred.
Posted by Jack Speer at 11/04/2011 08:08:00 AM 6 comments: Links to this post 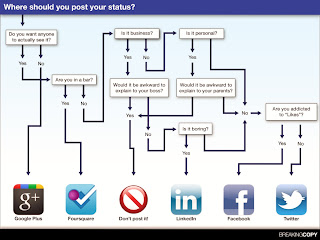 I was referred to this survey, conducted by Digitas and Harris Interactive, by this story. There I was, reading through it, when I hit paragraph two, which said that :
"A recent survey of adults found that a majority of respondents — 61 percent – said they expect candidates in the 2012 U.S. presidential election to have a social media presence. And 38 percent of respondents in the survey, which polled adults on behalf of brand agency Digitas, said that information found on social media sites such as Twitter and Facebook will help determine their voting choices just as much as TV or newspapers."
Well, no. That's not what the survey says. Look in the box on the top left of the graphic. It says that six out of 10 social media users think presidential candidates should increase their presence on things like Twitter and Facebook. The box next to it says that 82 percent of American grown-ups use social media. If you do the math, we end up with 50 percent of the population saying they want presidential hopefuls to up their presence on social media. That's still a sizeable percentage and number, but it's also wrong to say that six in 10 Americans think a presence on Twitter and Facebook are key to how they'll vote next year.
Who does it surprise to learn that social media users think the next president should use social media? Not me. I mean, look at the role that Twitter and Facebook played in the Arab Spring uprisings, that social media is playing in Syria, and that it played in President Obama's successful election campaign in 2008.
The real news in this survey was spotted by Matt Carmichael, who wrote about it on the AdAgeStat blog.
"Perhaps the surprising thing... is the stat that 40% of social-media users don't expect candidates to have a social-media presence."
Carmichael goes on to say that the politician who does not use social media is as backwards as -- and he lets us fill in the blanks. Maybe he's too young to remember the rotary phone and the time when party lines had nothing to do with how politicos voted but referred to someone you shared a phone line with, but that would be a good one to fill in the blanks with.
In any case, I found the original story to be a good example of why you should always go back to the original source of a story to double-check facts. In this case, that meant going back to the survey.
I am not saying that Twitter and Facebook are not key tools that candidates for the White House have to master. They are. As Digitas senior vice president Jordan Bitterman, who is also the agency's social marketing practice director (that has to be in the running for job title of the year), said in a release posted on PR Newswire:
"JFK is considered the first television President. Next year's victor may well be determined by the impact of Facebook and Twitter."
Posted by Karin Zeitvogel at 11/01/2011 02:13:00 PM 3 comments: Links to this post

Will there be a future for social media editors?

I attended the Journalism Interactive conference on Friday, and I really enjoyed the Friday morning session on journalism and social media use. New York Times social media editor, Liz Heron was on the panel and said that she thought her job might not be around in five years. You can see more of what she said here: http://www.niemanlab.org/2011/10/heron-i-think-my-job-will-probably-not-exist-in-five-years/ (source: Nieman Lab).

I thought it was a pretty bold statement, given that many journalists still do not use social media or are hesitant to sign-up. What do you think? Given that there is a heightened focus on social media, will jobs like Heron's still be around in five years? Or do you think there will always be a need for a social media editors within the newsroom?
Posted by Tim Ebner at 10/30/2011 09:16:00 PM 1 comment: Links to this post