Not only is Twitter used as a reporting or news gathering tool for journalists, it can have a role in creating news as well.

Due to the public nature of Twitter, journalist's tweets and interactions with other users are open for everyone to see. Sometimes controversial tweets or debates can flare up and therefore become the story themselves.

When I signed onto Twitter this morning, I saw that Sara Ganim had posted a link to a Philly.com story about a subject whom she did not trust. Within 15 minutes, she retweeted the subject in the article criticizing her and calling her names. 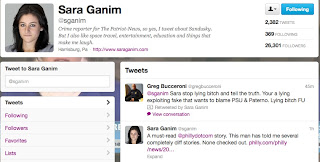 Before Twitter, it would have been unlikely the subject, Greg Bucceroni, would have gone through the process to contact her. And if he did, the public would not have known about it. But now, with a click of a button, any of the 26,000 plus followers Ganim has saw the tweet, making it a story in itself.

ESPN's sports business analyst Darren Rovell has no problem engaging in debates with his twitter followers. Often times, Rovell would engage in hour long back-and-forth on Twitter with other journalists he disagrees with.

Back in January, Rovell sent out a tweet lamenting how there was a "complete lack of interest" in tennis in the United States. Sports Illustrated Richard Deitsch took issue with the tweet and replied to Rovell, who did not shy from the confrontation.

The website, Awful Announcing, has a nice recap of the debate and notes Rovell is no stranger to the Twitter feud scene.

We've been told as journalists we should not inject ourselves into the story, but what about creating the story? With Twitter, anyone has immediate contact to you and there are times I believe the retweets or tweets warrant the public knowing.

I don't think Sara Ganim woke up thinking she would be called a "lying b****" but she was, and not only did her tweets create a story, she now is the story.

Class, all of you worked today on an aggregation/curation assignment using Storify. The point is to create a brief "story" out of the social media that you aggregate on your page. Your text additions should help to put what you find into context. Bonus points for using some of your own multimedia (photos/video/audio) on the page. Please make sure you listen to/watch all the audio and video you've dragged into your template, so that it makes sense within the broader point you're trying to make. Please also be sure to add at least one box of summary text, especially to introduce long video stories. After you've saved and published your aggregation piece, please grab the link at the top, and in the comments box below this post, write your linked title for the class to see before the start of class on Tuesday, Oct. 2. Thanks! Have a great weekend! (And don't forget your third blog analysis post is also due at the start of class Tuesday.)
Posted by Chris Harvey at 9/27/2012 10:58:00 AM 14 comments: Links to this post

News And The Evolution Of the Social Web

It is Tech Tuesday on The Kojo Nnamdi show on NPR. The show is from noon to 2 pm, but I am not sure if this particular segment is on in the first hour or the second. Check it out later today on the radio or on the web.
Posted by VoyeurLawyer at 9/25/2012 10:10:00 AM No comments: Links to this post

Topless Photos of The Duchess of Cambridge! Is this ethical?

The National Press Photographers Association's code of ethics echoes many of the sentiments of the SPJ code and the Associated Press Statement of News Values and Principles. I read the NPPA code to learn if it specifically addresses invasion of privacy. There is nothing that specific, but number four in the code states: "Treat all subjects with respect and dignity. Give special consideration to vulnerable subjects and compassion to victims of crime or tragedy. Intrude on private moments of grief only when the public has an overriding and justifiable need to see."

Prince William's mother died years ago in a car accident during pursuit by paparazzi. While he is not generally considered a "victim," it is important to note that past events are being repeated. Paparazzi followed Prince William and his wife, the Duke and Duchess of Cambridge, on vacation. A photographer used a long lens to capture topless photos of the Duchess of Cambridge sunbathing outside of her private villa. These photos were then published in tabloid magazines in Europe.

The NPPA Code includes another list of what visual journalist SHOULD do, including the following:
Take a look at the following reenactment of how powerful this sort of lens really is from the Today Show on September 18, 2012. Do you think this it is ethical to take a photo with this sort of technology?