Everyone's been raving about the Scottish sensation Susan Boyle. The unassuming forty-something made her way to the stage on the television show Britain's Got Talent amidst snickering judges and audience members. But the minute she opened her mouth and belted out "I Dreamed a Dream" from Les Miserables, simply put, she brought the house down.

But if it weren't for the Internet, Boyle probably wouldn't have become so instantly famous worldwide. Yes, getting the blessing of three judges gives you the chance to move up in the television show's competition. But it was YouTube and Twitter that brought Boyle worldwide fame in a matter of days. After Ashton Kutcher, linked an episode of her performance on Britain's Got Talent through his Twitter account, the video went viral. Today, Kutcher has nearly 1.7 million followers on Twitter. This just goes to show the influence a few people can have through the Internet when there's a large enough following.
Posted by Ellie Falaris at 5/06/2009 01:43:00 PM No comments: Links to this post

I think an interesting topic to discuss here relates to all of the swine flu coverage from last week. Coverage has died down recently, but online, newspaper and broadcast stories about the swine flu bombarded Americans every day last week. One could not turn on the TV or log onto a news site without seeing new information about the spreading of the illness. You could get tons of information from the Web alone, with constant updates at your fingertips. But all of this makes me wonder, is the excessive coverage helping to keep Americans informed, or serving to create unneccessary fear in them? I am leaning more toward the latter, especially since it turns out the swine flu is not all that different from the regular flu. What do you guys think?
Posted by Lauren Cohen at 5/05/2009 08:32:00 PM 1 comment: Links to this post 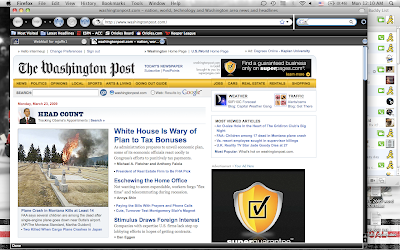 I apologize for my AIM being up there on the right, but here is one of the dangers of the immediacy of online news.

This is a screen shot of The Washington Post from March 23 of this year. If you visited the site, there was a feature they had been running for some time that tracked all of President Obama's appointments called "Head Count." It was very interesting and made it easy to follow what was going on, but at times, it can be an insensitive and inappropriate header for the day's news.

I do not know how this picture will turn out on the blog, so if you cannot see what is below the picture of a fire, here is what it says:

The way the layout looks, it is as if President Obama is killing people considering there were 14 who died in one crash and two in another. The fatal accidents right below "Head Count" sure makes Obama look culpable. What is worse, while the "Head Count" banner extends past the picture, the text does not, and lines up perfectly with the photo box, headline and captions.

In doing my examining for the final paper we are doing, I see quite different layouts between my paper and the Post. However, while it is easy to keep a successful banner and feature up, someone who is doing the Web editing, or producing, needs to take a look at the layout and the news that goes up for every update.

One other note on this is that on a column to the left where they have "MOST VIEWED ARTICLES," the same story is updated with a different count on those who died in the plane crash featured on the left. While there is software that allows different pods to contain different material (one subject being "hits"), it just does not look good to have conflicting stories, especially when a featured store is already outdated.

I apologize for not getting this up when it happened, but I am glad I took the screen shot of it. Sometimes Internet layout problems are funny, other times they are insensitive.

Class, here's what you have left to turn in to me in coming weeks:

* Your answers to questions posed from the USAToday tour. (counts as an in-class grade). Due by the start of class May 6. May be handed to me or e-mailed.

Because my daughter's school is closed down this week for swine flu, I will likely not be on campus on Monday or Tuesday. I will make every effort to get to campus a few hours before class on Wednesday, to answer final questions.

I will also be available by e-mail this week. The preferred e-mail for reaching me Monday and Tuesday is my gmail account: harvey.familyUP@gmail.com.
See your Wednesday, Chris
Posted by Chris Harvey at 5/03/2009 02:20:00 PM No comments: Links to this post

USA Today and Your Futures

Class, I hope you enjoyed the tour and talk at USA Today, and were energized by the possibilities facing you in this brave new-media world.

The economy will turn around, and I am convinced that if you are a hard worker and have superior reporting and writing (and some multimedia) skills, you will get a job.

It just may not be the more traditional news job you had envisioned.

Remember as you begin your search that not just traditional news organizations are doing news.

Many nonprofits are paying reporters and researchers to report on specific hotspots or topics. (Stateline.org, for instance.)

Some nonjournalistic businesses are paying reporters to write about their specific niches.

And many enterprising young journalists are connecting with or launching Web startups--helping to shape the way news will be covered and displayed in the future. (One of our recent graduates recently became editor of a Web startup in Los Angeles, for instance.)

So if you're smart and have good skills, you will get a job. But you may have to be dogged to land it.

In the meantime, check out some of the job listings on JournalismJobs.com, MediaBistro and Poynter.

I had a great time at USA Today, and what really resonated with me was the message that adaptability and a willingness to learn new technologies, and share that knowledge with others is key to making it in today's media world.  One way we learned that USA Today is trying to adjust to new technology and ways of sharing information is through its iPhone App.
In his presentation Bill showed us the application.  I do not have an iPhone, but a lot of my friends do, and out of everyone from our class who went USA Today, three people raised their hands to say they had an iPhone, so I figured I'd try to learn more about Apps.
I quickly discovered through browsing iTunes' App store, that there are applications for everything, including all types of news.  There is an application for Breaking News (Called Breaking News), there is an application for news about the lottery (called Jackpot! News), and there is even an app called "Easy News" that links users to "nine of the most popular news cites," including ABC News, Associated Press, CNN, Fox News, USA Today, Yahoo!, and MSNBC.  There is also an application called "Easy Gossip" which links users to 7 gossip cites like E! and Perez Hilton.com Mobile!
I found USA Today's app in the iTunes store, and discovered that it was free!  It gives you access to the publication's sections, pictures, and weather.
What do you think of iTunes applications?  Are they a way for news organizations to adapt to the changes in the industry?  Do you think that this is a reasonable way to reach out to users?
In their Poynter Online article, "iPhone 3.0 Software Offers New Applications for News" Amy Gahran and Barb Iverson explain that "... the number of people getting news via cellphone doubled from 10.8 million in January, 2008 to 22.4 million in January, 2009."  They also explain further development of technology in the iPhone 3.0 Software that will be released this summer.
I think that iPhones will continue to be more and more popular, and that news organizations really should take advantage of the opportunities that they offer.  As Iverson and Gahran write, "... even free iPhone apps can help build online businesses (including for news publishers, advertisers, or news-related services) by growing audience, increasing user engagement, or enabling additional features or services."
It took a while for iPods to become popular, and now they are mainstream.  Everyone I know has one, from the 11-year-old I babysit to my mom.  I really think that news organizations have a great resource in the iPhone, even if the benefit hasn't become completely apparent yet.
What do you think? Is an iPhone App a useful and effective technology for news organizations?
Posted by Allison at 5/03/2009 12:31:00 PM No comments: Links to this post